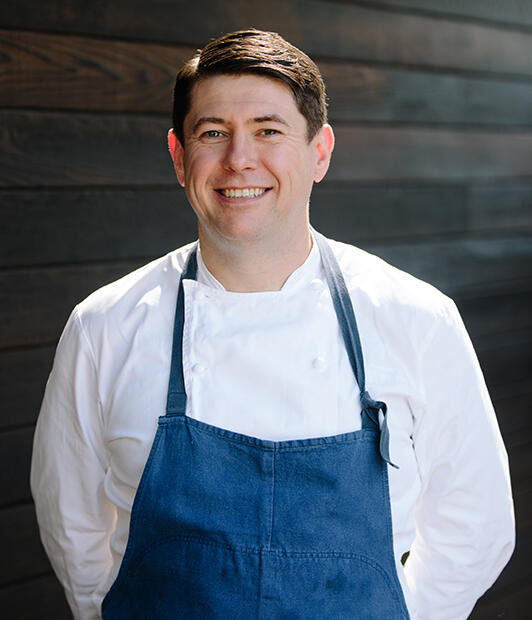 As the chef de cuisine, David Breeden leads the day-to-day operations of The French Laundry kitchen, carrying on the commitment to excellence and collaborative spirit that has made the restaurant what it is today. Like the chefs de cuisine he trained under, Corey Lee, Jonathan Benno and Eli Kaimeh, David is a product of a culinary culture shaped by a sense of community and Thomas Keller’s mentorship. David first staged at The French Laundry in 2005, parlaying that role into a permanent position as the kitchen’s butcher and later as chef de partie. In 2006 he assumed the post of chef de partie at Per Se in New York, where, in the course of a six-year tenure, he rose to the role of executive sous chef.

Born and raised in East Tennessee, David grew up exposed to a wide range of culinary styles including traditional Appalachian, low-country, and French cuisines. He attended the Charleston, South Carolina, Johnson & Wales University program before working at some of Charleston’s finest restaurants, including The Charleston Grill, McCrady’s and Woodland’s Resort and Inn.

A genuine love of food and an appreciation for the communal pleasures of dining drew David to the profession. From the start of his career at The French Laundry, he has dedicated himself to communicating Chef Keller’s philosophy and executing his culinary vision. In his latest role, which he assumed in 2012, David leads the next generation of young chefs in making the best experiences for guests at The French Laundry.

He is a coauthor of The French Laundry, Per Se cookbook by Thomas Keller, which published on October 27, 2020.