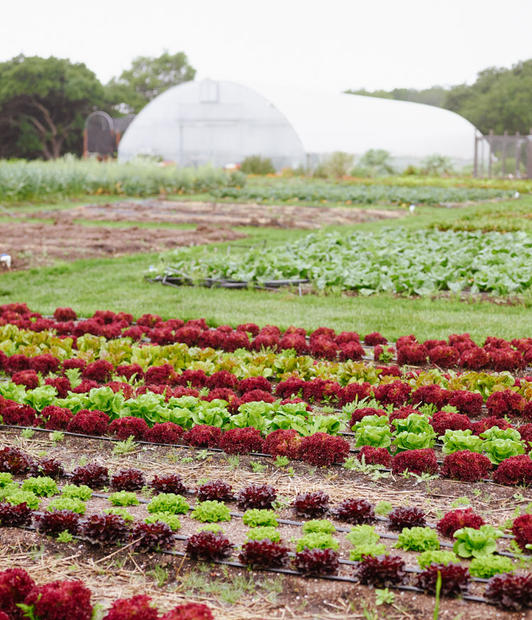 A culinary garden has always been a hallmark of The French Laundry and began with Don and Sally Schmitt. Early on, the restaurant relied solely on Peter Jacobsen’s local harvest (and still benefit from his fruit trees). But what began as a small plot of herbs in the courtyard has since evolved into a 3.5-acre lot across the street—the main source for produce used in the restaurant, as well as sister properties throughout Yountville.

The garden is viewed as an educational tool; the experience of working in the garden gives cooks a reverence for their raw ingredients, and they gain guidance and perspective from Culinary Gardener Brett Ellis. A graduate of Western Michigan University, he is a veteran of several New York City kitchens. It was a growing interest in working with food at its source that led him west in 2017. “I just love being with the plants,” he says. “I like coming in every day where everything's alive and changing day to day.”

Brett manages a team of seven, where a routine day begins by checking in with the chefs to coordinate the harvest for that day’s service. “I think that it works well for me because I am familiar with the way that chefs experience the garden,” he says. In addition to cultivating a wild crafted area with native perennials, herbs, and flowers, he recently seeded middle eastern heirlooms for the chefs to try. "My favorites are Iraqi eggplant and Lebanese zucchini called kousa."

Farming has been in his family for generations: Brett’s great-grandfather and brothers started a produce business in Grand Rapids, MI upon arriving from Syria, and on his mother’s side Brett can count a long line of MI farmers as well. “One thing I like about The French laundry is, yes, it's a three Michelin star restaurant,” he says, “but we take a small farm perspective and we’re sharing invaluable lessons with the greater community.